Education prior to the earthquakes

What did the education system look like prior to the earthquakes

The fact the number of 15-19 year-olds in formal education went up is one of the overall reasons the overall NEET rate has fallen, despite the increase in the rate for 20-24 year-olds. 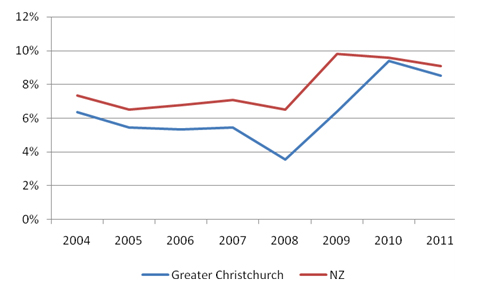 The apparent improvement in greater Christchurch is magnified by the drop in the youth population in the region, with the number of 20-24 year-olds falling by more than 6,000 between June 2010 and June 2011.

Taken in isolation, the data for 20-24 year-olds also shows the percentage of NEETs in this age group has deteriorated when compared with the rest of New Zealand. The percentage of people aged 20-24 who are NEET in Christchurch rose from 10.6% to 12.2% between 2010 and 2011, while in New Zealand as a whole, there was a fall from 11.6% to 10.6%. The trend is illustrated in Figure 2. 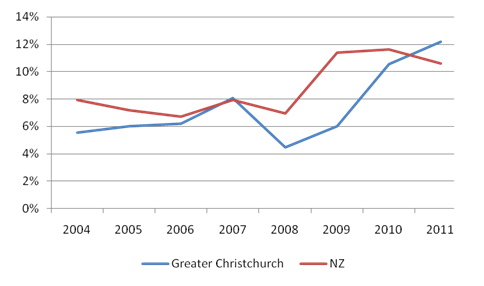 Data from the Ministry of Social Development also indicates the number of people aged 24 or under on the Unemployment Benefit increased by 15% in the year to July 2011.

The table below gives the participation rate in education of 15-19 year-olds as calculated from the June Household Labour Force Survey data.

Overall what we are seeing is:

Around 38% of those aged 25-65 in Canterbury have low1 level literacy and around 47% have low numeracy.

While these are slightly better than the proportions in New Zealand as a whole, the population in Canterbury has lower skill levels than Auckland or Wellington.

The population is less well qualified than the country as a whole. In the 2006 Census:

The qualifications profile graph below shows Canterbury people are more likely than the country as a whole to have trades or school qualifications, but less likely to have a degree or higher. 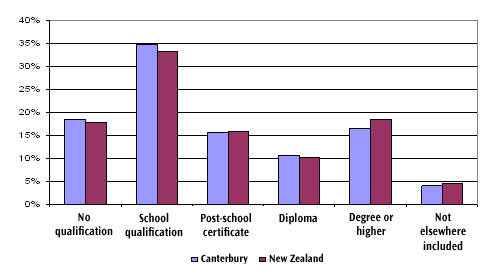 Figure 4: Educational attainment of the workforce, Canterbury vs. New Zealand, 2006

The proportion of people working in occupations associated with higher skills is slightly higher than the national figure2 but not significantly so.

The data suggests the Canterbury region has a labour market that is broadly typical of New Zealand as a whole, but that does not have the high-skill profile of the Auckland and Wellington economies where the most knowledge-intensive industries tend to be located.

1 Low skills, in this context, are those whose skills result in a classification of level 1 or 2 on a five-point scale, where level 3 is considered adequate for full participation in a modern, knowledge-based economy.

2 Lane C (2010) Adult Literacy in New Zealand: a regional analysis, Ministry of Education. Lane establishes that computer use is a better proxy for high skill by occupation than traditional classifications that use occupation names.